Jae is still in his super-active phase, and has recently settled down a bit more for homeschooling activities.

He continues to attend Shichida weekly classes with Daddy, who has reminded me to continue doing home practice. Ok, I’m trying, just that this boy loves running about and doing his own stuff, so I end up focusing mostly on Vee who’s super-cooperative and enthusiastic. Haha…

I’ve finally created a toddler area in our schoolroom! 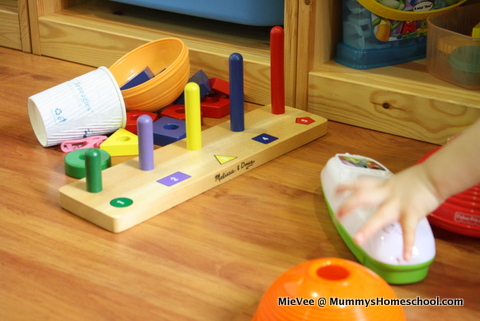 Jae seems to be an athlete-in-the-making.

With Jae doing more Montessori activities, we’d have a fun and busy year. The rest of his updates on feeding, pre-potty training and sleeping are posted at Mummy’s Reviews here.