I often get enquiries on how to get the child’s attention for learning. One effective way:

This means following his interest and teaching him accordingly. He’d be yearning to learn from you and give you his best attention ever.

Vee (6 years 9 months old) is interested in special numbers and especially huge numbers. He has been asking “What comes after million, billion and trillion?”

So I made this set of “Names of Large Numbers” flash cards for him: 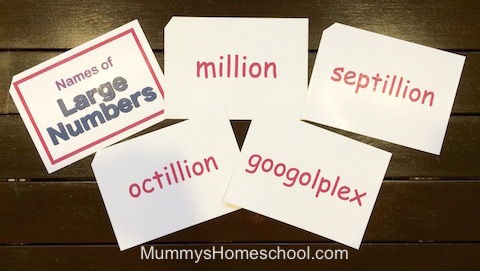 The back – with info on the numerical expression and exact numbers of zero’s for a better feel of how big the number is: 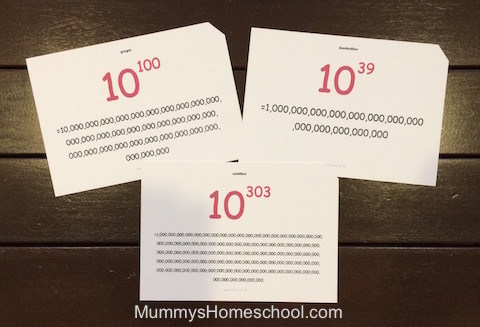 He has been working with Montessori math materials in thousands, and I’ve shown him how to visualise from ten thousand until billion. How? By flinging my arms, jumping from end to end of the kitchen, estimating how to multiply a quantity by 1000 times each time, to reach the next large number.

As I last remembered, the quantity became larger than our house! The kids were rather amused. 🙂

So we’ve covered the concrete and pictorial aspects before moving on to such abstract numerical concepts.

With the cards, he also tried arranging the quantities in increasing / decreasing order, a memory exercise.

When the child is interested and ready, he’d be thirsty to learn much more.

As a math-crazy mum, I made another flash cards set on “The first 200 digits of Pi”:

That’s how we make learning math (or anything else) fun.

Get your flash cards printables