Prior to this year, Jae has already completed a range of pre-writing activities, including colouring, at his own spontaneity.

Use a pencil to put an obvious DOT at the starting point.

Let the child trace the character with dark-coloured marker pen or pencil.

Be positive. If you need to give comments, make sure it’s positive and encouraging. (Without over-praising.) 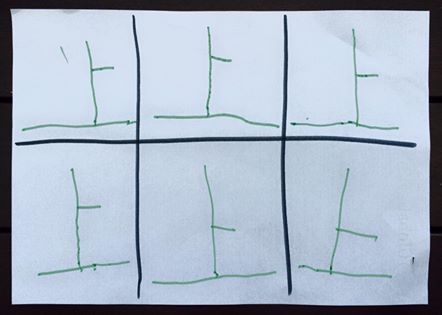 A4 paper, divided into 6 large boxes.

Jae REQUESTS to complete Steps 2 & 3 before tackling the writing homework.

After the “warm up” activities above, it’s much easier for Jae write in the smaller squares.

Sometimes, he gets frustrated when the characters don’t turn out nice and he has to re-do it.

When he shows signs of tiredness, I suggest that he rests and do hand exercises.

He also asks to use the WePlay squeeze rings, which come in 3 degrees of stiffness.

After a break, he goes back to writing.