Vee has turned 4 years 9 months old, and here’s his learning progress update for the past 5 months…

Vee’s last term in Shichida KL ended in June, so that he could spend more time on music classes. We continued to do regular home practice during until I delivered Baby El in end Oct.

Image Story: From 4 years old, Vee learnt to image a detailed scene in his mind.

Here’s his image story of visiting a wildlife park, which is hilarious! 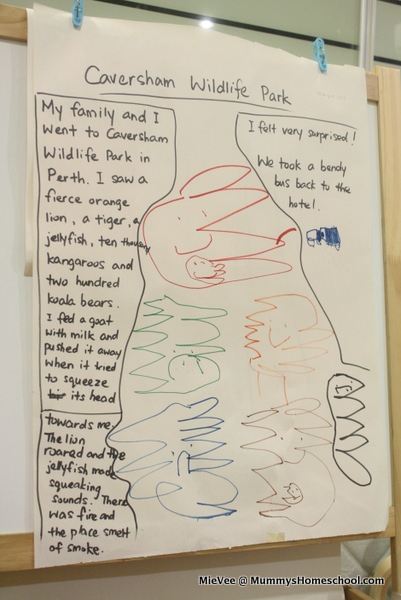 This is another image story of him being a pilot: 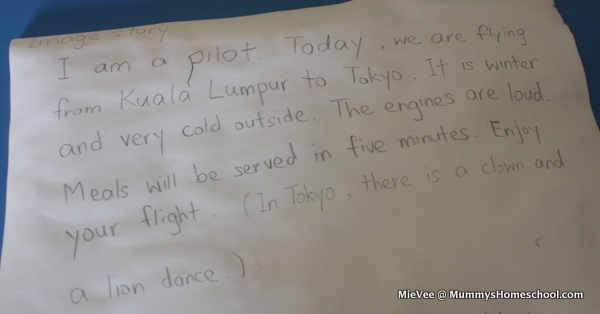 He narrated the story with some prompt questions from me to cover as much of the five senses as possible. Then I helped to write his story out.

After that, we drew and painted the picture together. I encouraged him to provide most of the input. 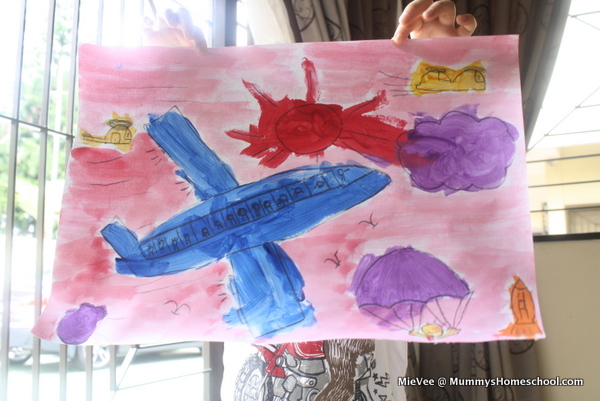 Linking Memory: The Shichida 1000-pictures LM sets come only with 2 booklets of small pictures and CDs. I observe that Vee prefers to work on memory activities with flashcards and movable cards. Therefore I’m creating flashcards and cards from the sets, which is tedious work!

Tip: The learning materials have to appeal to the child’s interests and learning styles.

Right Brain Mathematics: He’s able to “see” math in action around us. For instance, he was playing with Lego DUPLO and started coming up with various ways to make 6 by seeing the “dots” on the bricks. I wrote down the equations as he narrated his discovery. 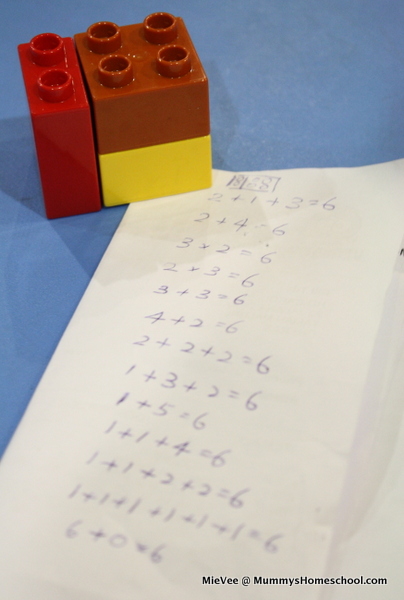 He was at a restaurant waiting for food and blurted out “3+3+3=9”. I turned around and saw a big window pane divided into 9 squares.

We’re now learning to image quantities of 10s, 100s and 1000s after working with Montessori beads. This way, he’d be able to do mental calculations without needing physical manipulatives in future. This is an example of how we blend Shichida and Montessori methods.

Workbooks: I bought several left and right brain activity workbooks, in anticipation that we wouldn’t have proper lessons for a while. These came in useful on days when I was too busy before and after Baby El’s arrival.

Practical Life: I let him help out around the house whenever I think the activity is suitable for him. He enjoyed using the round corner cutter to trim the edges of our laminated materials.

When I’ve excess laminated material after cutting, I’d use my cutter to create lots of perforated lines. He loves tearing along the lines. I remember enjoying tearing paper into tiny pieces when I was very young.

Writing: He didn’t write much for several months, so I started exploring ways to attract him to writing. Two ways that have worked very well:

For Chinese, he’s already very familiar with the basic strokes, so he went straight to writing characters such as his name, 爸爸, 妈妈, 公公, 婆婆 and 生日快乐. I teach him the correct stroke sequence (笔顺) and he remembers if he practises regularly.

At the moment, we don’t do “drilling”, which he is bound to dislike. so I simply let him write whenever he wishes to, with the materials available at home. If he doesn’t write for a while, I’ll find ways to spark his interest again.

Tip: You may also write / print with yellow or light orange ink and let the child trace with pencil. I read from Bright Hub Education that this is easier to trace than dotted lines, which is true for Vee.

Drawing & Colouring: This is an area he wasn’t keen on doing for a long time. I rode on his intense interest for emergency & rescue vehicles, and got him interested in drawing and colouring ambulances, fire engines, etc.

He loves the Elmer books series, so he happily coloured a small Elmer that I drew. 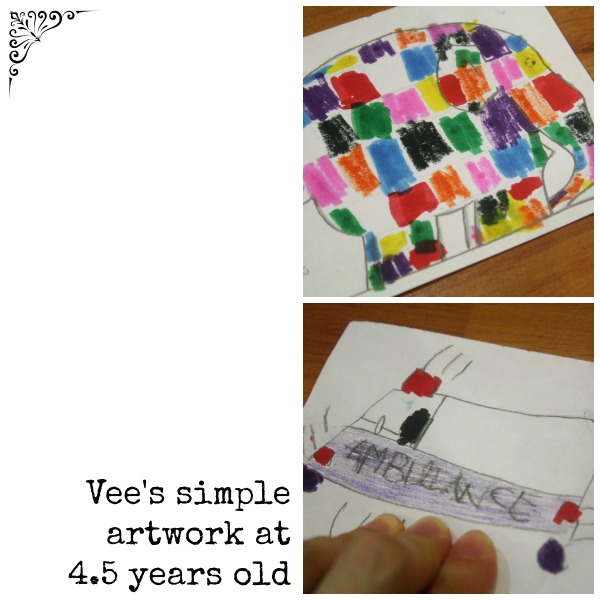 Language (English): With time so tight, I only completed part of the Pink materials and covered them with Vee. These include many simple CVC (consonant-vowel-consonant) words such as “tin”.

Part of our Pink materials: 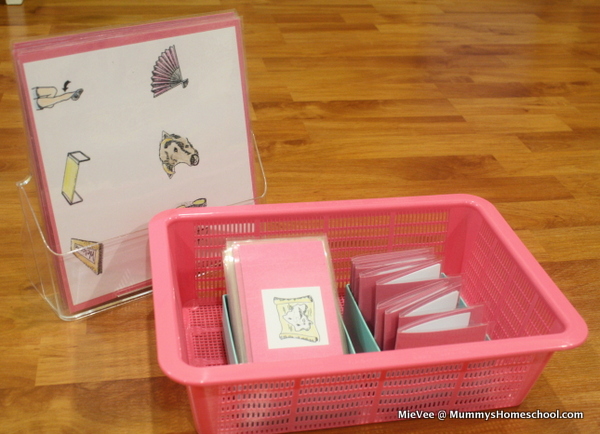 Vee likes the Pink materials and appreciates them even more knowing that I put in lots of effort to make them. I love the materials too; which really feel very precious since they’re homemade.

Reminds me that Prof Shichida also encouraged making our own materials, at least some when possible. I truly enjoy DIY-ing materials, perhaps similar to how many mums love cooking for their families.

Anyway, Vee is able to read some common sight words, CVC words and some longer words he’s familiar with. When I invite him to read aloud, he usually declines. He doesn’t mind though if I read a big chunk and pause for him to try a word or two.

* series. I’m glad that he can sit through longer and wordier stories.

However, he was tearful at the part where the farmer caught a rabbit and used it to make a pie, and avoided that book since. I’m glad he’s empathetic and am now very careful about how I read similar unkind behaviour from stories.

Also, I’ll remind him that this is only a story and not real, so that he’s assured that no real harm has been done. And we discuss that we shouldn’t engage in such unkind acts.

So far, this method has worked well and the materials are easy to make.

This is our Chinese reading basket: 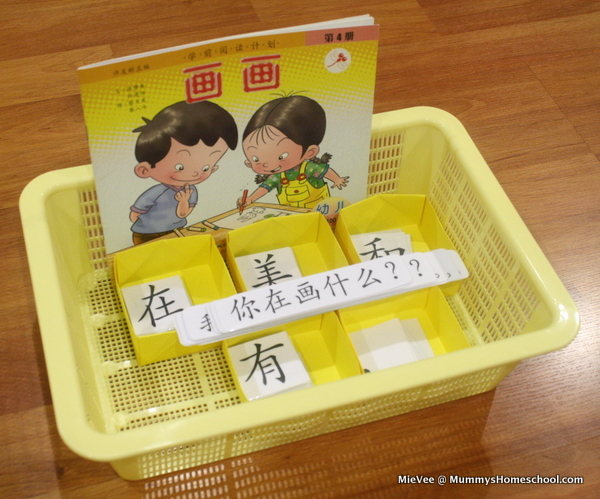 Feedback regarding the new books we bought:

Behaviour: During his music and swimming classes, he’s still talking a lot more to the teachers rather than his classmates. In fact, he hasn’t spoken much to his classmates at Shichida and music class even after attending the classes for at least a year.

He was enthusiastic to make cards for his classmates but needed some encouragement before giving them the cards.

On the other hand, he chats almost non-stop with the adults at home, Jae, his cousins when they meet, and some of his friends’ parents. He also plays well with children who are older or similar age peers in a small playdate setting.

Music: He has been attending group keyboard and individual piano classes. The group class is more interesting with teacher-guided activities, and group or solo playing, so we’ll still continue with it.

Vee learns more challenging pieces from the individual class and he enjoys playing lively songs. Even for regular songs, he gets a kick out of playing them really fast.

He’s excellent at memorising the songs after he’s mastered them. This is a great way to practice memory skills, since we aren’t doing Shichida home practice regularly after Baby El arrived.

I haven’t been practising on the keyboard much nowadays so I’m falling behind him in mastering the pieces. Arghhh!

Swimming: He can paddle very fast while holding the board and his head is still ABOVE water. Just got to keep encouraging him to progress a bit every week. I’m confident he’ll be able to swim by himself some day! 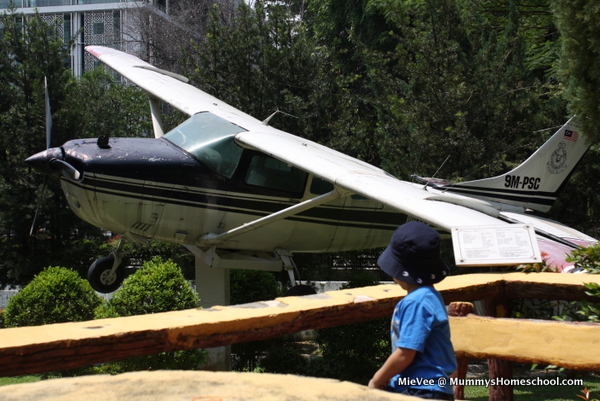 where the boys were fascinated by miniature police vehicles… 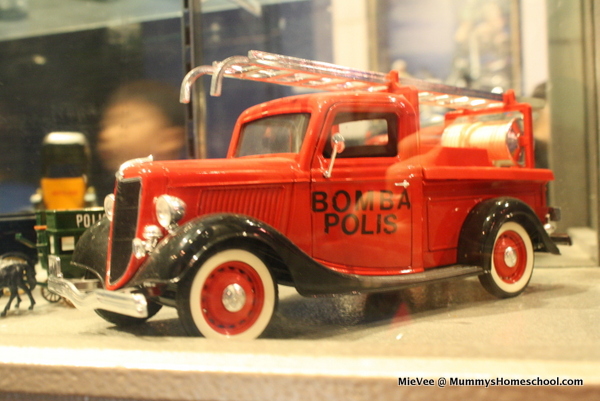 a sudden trip to Perth (where we booked the flights and accommodation only 1-2 days before flying!)…

Hubby is recuperating from a back injury, so all weekend excursions and travels that involve much walking have been put on hold. To make up for this, I ensure Vee gets lots of free play time every day.

Play: He still loves playing with Lego DUPLO and has been creating more elaborate structures such as this:

*, where he gets to practise strategy, reading and counting. I’m excited that he’s finally old enough to play card games with us!

Sometimes he plays nicely with Jae but often they squabble because Jae messed up his creations or both of them want the same toy.

Strangely, when someone wants a toy, both want it. Through the day, I’ve to guide them to remember their rules (more on our rules next time), repeating the same thing over and over again.

Now that Baby El is 7 weeks old, we’re more settled and having longer homeschooling sessions, almost like before. The challenge is preventing Jae from disturbing Vee’s work because I’m often babywearing El in the morning to help him nap.

I’m sure things will get better as El grows. In the meantime, we’ll just learn a bit every day and be contented.